Whether it’s a fiery love song or an angry protest anthem, when it comes to making fire-themed music, musical artists have burned up the charts for centuries. 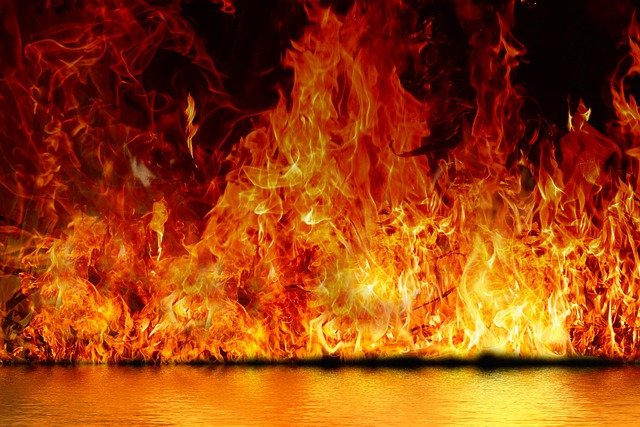 I. Pop Songs About Fire

Many pop songs use fire as a metaphor for passion, lust, desire, and sometimes destruction.

1) Burning Down the House

“Burning Down the House” was written as a metaphor for liberating oneself from whatever is holding them back.

Written after a conversation with Sean Lennon, who was 21 and expressed he thought it would be easier to grow up in an earlier decade.

The song was inspired by The Bangles visit to Graceland and an eternal flame that burned in a shrine for Elvis.

Firework was written to inspire those who feel unappreciated or underestimated.

In rock music, a person may use fire to represent passion, power, or anger and frustration.

2) Sleep Now in the Fire

The song is about greed as a cause of the decline of Western civilization.

Artist: The Jimi Hendrix Experience
Album: Are You Experienced
Year: 1967
LISTEN ON:

5) Smoke on the Water

Smoke on the Water is about a fire that started during a Frank Zappa concert in 1971.

Fire is often used as a metaphor for love, passion, and desire. It speaks to the desire people feel when they are drawn to each other, like moths to a flame.

Through the Fire is about willing to go to any lengths to be with the one they love.

Fire and Desire is a love song that was written by Rick James for Teena Marie while they were dating.

Fire is often used as a metaphor for passion, intensity, and energy in rap and hip-hop songs. As a symbol for being hot and on top, rappers often use fire as a way to express their power and dominance.

Fire Squad is about the struggle to make it to the top as a rap artist.

This is a seductive song that encourages a love interest to wait before intimacy.

Country songs use fire as a metaphor for love and passion, while some of the best country songs about fire paint pictures in your mind of heartache, betrayal, and redemption amidst the flames.

1) Setting the World on Fire

5) Out of Control Raging Fire

The song is about rekindling a flame with an old lover who broke her heart.

Fire can be just as symbolic and rebellious metal as it is for other genres. Lyrics portray fire as a power that destroys enemies, shows the intensity of anger or passion, or even how it can give us hope.

The song is about the ways the devil will deceptively tempt people into following him.

The song is about being determined to stand and fight rather than back down.

I Am The Fire is a song about staying motivated especially when times get tough.

Burning is used metaphorically to describe the feeling of love or passion. It’s also used to express anger at someone who has hurt them by burning their trust.

Beds Are Burning was written in protest of the suffering of Australian Aboriginal people.

Fire can symbolize either hope or destruction in Disney songs. It can also symbolize power – the ability to destroy, create, hurt, or heal.

1) Shere Khan and the Fire

Just Like Fire is a song about not letting anyone get you down or discourage you from going after your dreams.